Bill Clinton Knows A Thing Or Two About Coffee

Former US President Bill Clinton was one of the guest speakers at the first-ever World Coffee Producers Forum in Colombia because he knows a thing or two about coffee production and its benefits to a developing country. When I first heard that he was speaking at the event, I wasn’t sure exactly why, until I did a bit of research and then I understood. Not only does he have a track record of using coffee to help leverage recovery and development, but he certainly adds weight and credence to the event. 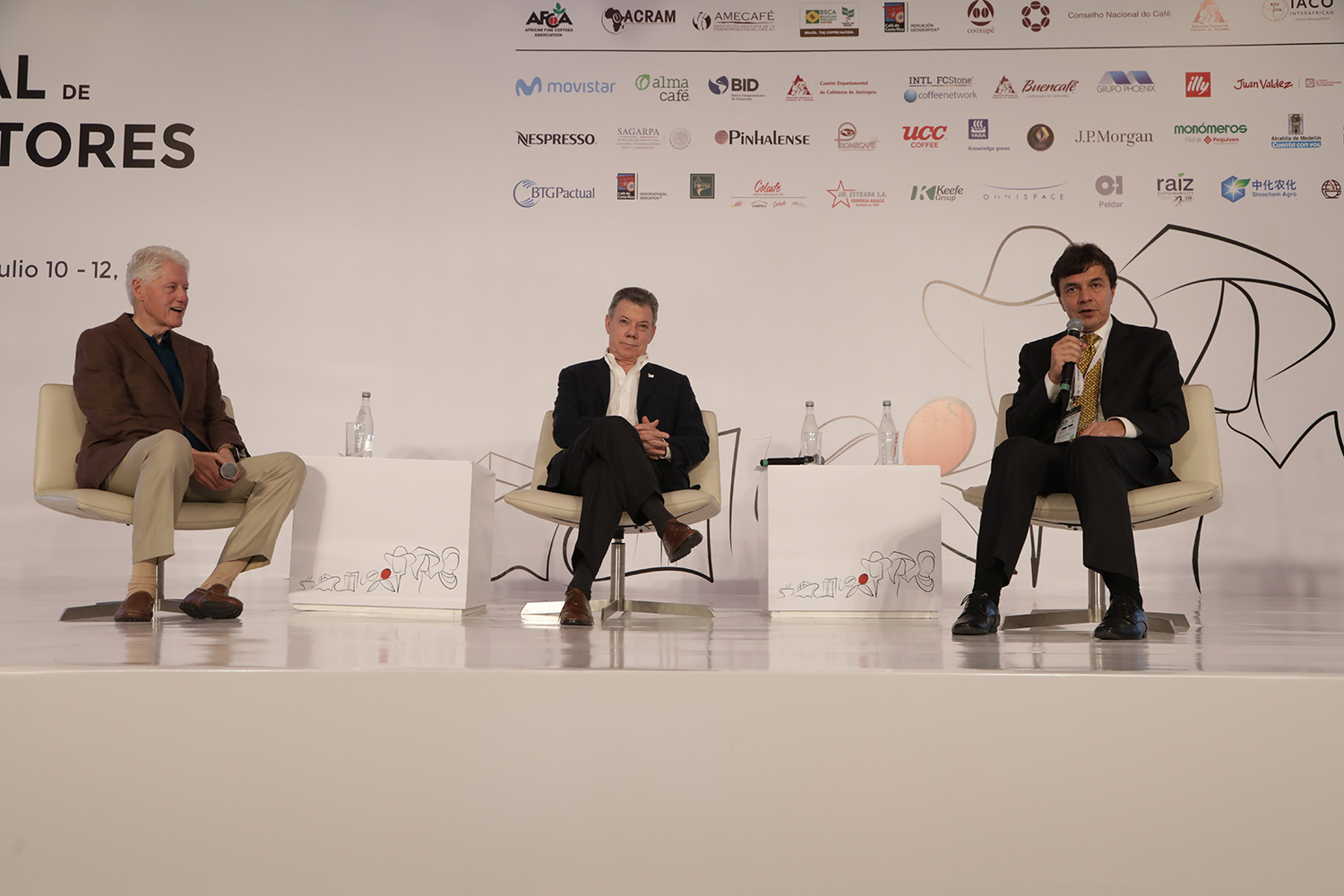 Coffee As An Anchor

In 2010, after a devastating tsunami destroyed a lot of coffee production in Haiti, the Clinton Foundation coordinated with La Colombe and Allegro Coffee, among others, to help the country of Haiti by leveraging coffee production.

Also in 2010, the Clinton Foundation partnered with Scottish philanthropist Sir Tom Hunter’s Hunter Foundation to form the Clinton-Hunter Development Initiative (CHDI) which, among other things, established a coffee roasting and packaging facility with a 3-tonne daily (!)  roasting capacity.

At the World Coffee Producers Forum, President Clinton called initiatives such as these; ‘using coffee as an anchor crop.’ According to Clinton, the point isn’t to depend solely on coffee to advance a developing country, but rather to “ride coffee,” to use it as a vehicle or a tool. He said some of the feedback he got from farmers in Rwanda was that the most important thing they did was to give them good instruction and good materials for growing and the means to intercrop (plant multiple types of crops on the same plot of land), which allowed them to earn more money even with fluctuating coffee prices.

The most important thing we can do is to see coffee as an anchor toward development.

In addition to leveraging coffee as an anchor, he recommended taking climate change into account. He talked about leveraging sustainable coffee production towards eco-tourism, something Costa Rica does.

He also talked about the Clinton Foundation helping the Colombian government establish clean energy on the islands of San Andrés and Providencia. He noted Costa Rica’s nearly 99% use of clean energy and how clean energy reduces the total cost of energy in rural areas.

Make It A National Strategy

Putting It All Together

And to put all of those ideas together, he said:

If you want to know how to make this work, first you gotta make the coffee work. Second, you have to ask that the coffee growers get a fair percentage of the end-price of the coffee. If I pay 3 or 4 dollars for a cup of Starbucks in my little town in New York, I don't really care as long as I know Starbucks is out there trying to do what I saw them do in the beginning, in Rwanda and Aceh, and in modernizing it. I just want the farmers to get a fair deal. [Third], you should think of how coffee can be used to fight climate change, both in preserving the soil and in diversifying crops and in reducing the inequality between urban living and rural living in country after country after country.

If you have a comprehensive strategy, and then you just take these things one thing at a time, I think you can make a real difference as I think it has, in the places I've had the privilege to work.

I was happy to hear him mention intercropping, as it’s something I’ve thought of and written about here before. The more I learn and think about it the more I believe that is a critical piece of small holders survivability. Dependence or even too high reliance on income from one single crop is gambling against the house—and over a long enough timeline, the house always wins.

His best advice might have been a buried nugget: ‘have a comprehensive strategy and take it one step at a time.’ Or even better, how does one eat an elephant? One bite at a time.

You can listen to a recording, or read a transcript of the entire panel discussion between President Clinton and President Santos here.