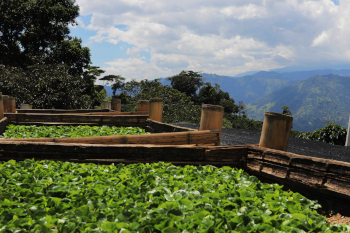 Coffee Grown In California
Frinj could provide the technologically advanced plant as well as production and business training to producers. This could be a huge benefit to producers in developing countries.

One of the themes that developed during the World Coffee Producers’ Forum was a desire by some to reduce competition among farmers. Let’s consider this from a purely economic point-of-view: competition can drive down costs and drive up quality and innovation. When competition is removed from the market, you increase the power of monopolies and you remove most incentives for product development and improvement.

If we remove all competition in a given producing region, producers will become complacent with a captive customer base* and product innovation will be stifled, supply will be artificially choked (to further increase prices), etc. We’ve seen this before in other markets with monopolies such as Ma Bell, Luxottica, and Monsanto, for example.

Removing competition is a fast-track to mediocrity, as producers will have little incentive to innovate and produce new and/or novel products. This could possibly mean the end of “specialty coffee” for a region that snuffs out competition among farmers.

Some readers may be stuck on the idea of driving down the cost of coffee, especially when we know there is already a problem of farmers not getting enough money. However, increasing revenues isn’t the only way to increase a farmer’s profits. Decreasing production costs is another way one can increase profits and farmers—if they are running their farm like a business—should already be working on better production and processing techniques to drive down their cost of production.

Granted, this all sounds well-and-good on paper but there are still major hurdles, such as a lack of investment in coffee production, illiterate smallholders, lack of infrastructure, etc. It’s a very complex, very large problem. Remember, for the sake of this writing, we’re just looking at the problem from an economic point-of-view and in that regard, I don’t see how removing competition will help the industry in the long run.

I had a conversation with a gym buddy about this topic and he told me a relevant story about competition in the world of tea: