Global coffee production and sustainability by Carlos H. J. Brando
This book is a great asset if you want a deeper understanding of the global coffee market and are looking for a foundation on which to understand ways to sustainably produce coffee.

I started an experiment back in December by pre-germinating different coffee seeds from the same producer (K’Ho Coffee in Vietnam).  One set of seeds were fully wet-processed on site and are essentially un-roasted coffee beans.  The second set of seeds started as freshly picked cherries hand-pulped on site then immediately placed in activated charcoal for the trip home.

I pre-germinated both sets of seeds the same way; by soaking them in water for 24 hours.  I washed the fresh seeds before starting the soak, just to remove most of the activated charcoal.

A pre-soak helps because: “The uptake of water by seeds is called imbibition, which leads to the swelling and the breaking of the seed coat1.”

Near the end of the soaking period, I prepared the market pack by half-filling each cell with coarse vermiculite and then watered the vermiculite to get it moist before adding the seeds.  Then I placed each seed in its own cell with its flat-side down.

Once all seeds are placed, fill the cells with vermiculite and lightly moisten the cells again and set the market pack aside where you will see it every day.  At this point you do not need any sunlight — in fact you do not want it.  Every day add a little water to the cells to keep the vermiculite moist.  The market pack I bought has a large hole in the bottom of each cell, to drain water.  While I am away for multiple days, I place the market pack in a sink with water very slowly dripping from the faucet into the tray so the cells can soak it up from the bottom as needed.

Germinating coffee seeds are very sensitive to water stress.  In case of excessive draught the seeds die, but if the soil is too wet the seeds may rot and young seedlings can be killed by damping-off.  The soil of the germination beds should never be allowed to dry out completely2.

On day 51 I saw the first disturbance of vermiculite and it was one of the second set of seeds — the freshest set.  The first visible part of the seedling is the hypocotyl arching up, slowly pulling the cotyledon (the seed) out of the soil.  This is called an epigeous germination*.

By day 57 the cotyledon has completely emerged and the hypocotyl has further straightened and grown to a length of 2.2cm.  By day 59 it was 3cm tall.

Larger pictures of these trees can be found on my Flickr page.

Three of the seedlings are showing signs of necrosis near the cotyledon.  I haven’t been able to tend to them daily due to travel obligations. That they made it this far is amazing.

I uprooted one of the dying seedings to take a look at the roots.

The one survivor of the bunch is starting to show the tips of green leaves: 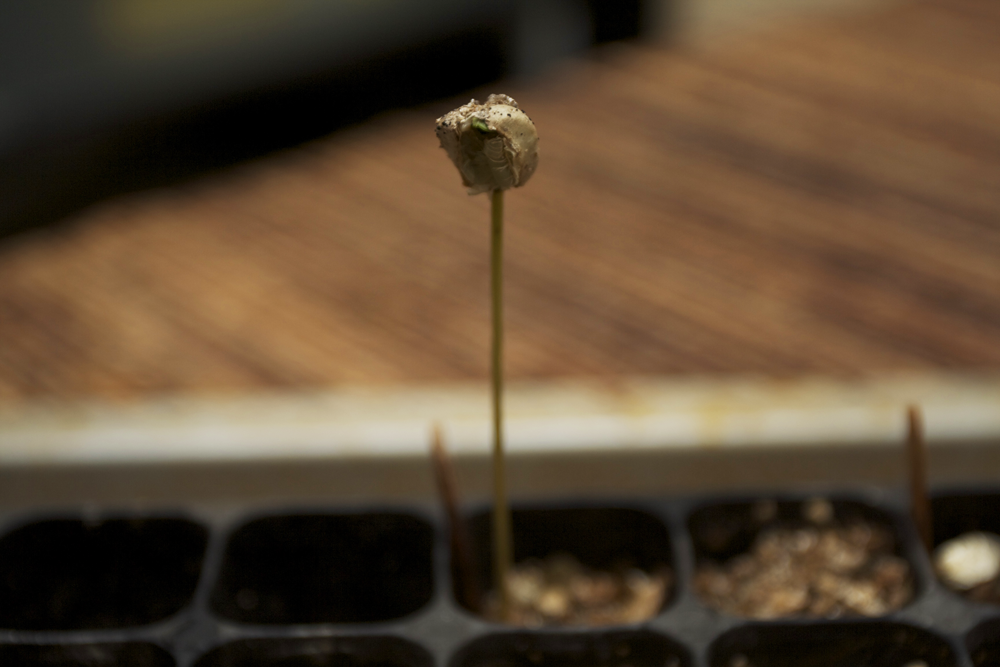 All of the seedlings have died.  I’m sure they died of neglect; not enough water.  Frequent travel prevented me from tending to the little guys.  I’ll have to try again when I can give them the attention they need.