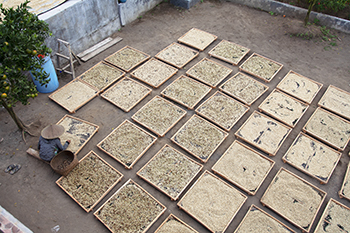 One of the steps in processing fully-washed coffees is to ferment the pulped seeds to help remove the sticky mucilage that surrounds the seed.  Most of the time this fermentation process is a wild fermentation started anew each day and that means from day-to-day, different strains of bacteria and yeast may become dominant, slightly altering the coffee's flavor from day-to-day.

By using a starter culture from the previous day's batch*, we can accomplish two things;

During the fermentation process, first lactic acid bacteria (LAB) and then yeast colonies begin to proliferate in the sugary water.  Early in the process, the LAB create an acidic environment, which helps to prevent the growth of other, unwanted bacteria not adapted to an acidic environment.   It is believed that LAB aren't directly involved in mucilage removal but instead, create an acidic environment which helps degrade the mucilage.  Yeast join the party later in the fermentation process and some create pectinase enzymes, which degrade pectin — a major component of the mucilage.

It would be ideal to have starter cultures of yeasts that produce specific pectinases known to effectively degrade the mucilage while preserving cup quality, but in the absence of those specific yeasts the previous day's fermentation water will at least carry over the same yeast and LAB colonies from day-to-day, thus achieving our two objectives from above.

The water used on the day of the experiment had a pH of 9.1 (surprisingly alkaline) and the pH of the starter culture was 4.1.  After 30 minutes of fermentation, the pH of the test bucket was 5.1.

Anecdotally, using a starter culture reduces the pH quicker (increasing acidity), which results in a shorter fermentation time.  This is desirable because we want as short a fermentation time as possible because soaking the beans leaches flavonoids from the beans into the water, thus reducing the coffee's flavor complexity and quality.

I plan on revisiting this experiment in July when I can do a better job of documenting everything.

Update: I have done a more proper experiment and found that using carryover, or "yesterday's water", as I like to call it, reduced soak time by 38% when using 10% starter culture (by volume). Experiment details below:

The experiment was performed at 1111MASL.

Bucket #2 received no starter culture and 10 scoops of clean water.

Separate stirring sticks were used for each bucket to prevent cross contamination. Before each pH reading, both buckets received five bottom-up stirs and the meter was rinsed with clean water before every reading.

Below are the individual readings:

A few things to note:

Using a starter culture in your fermentation process will help standardize the dominate yeast and bacteria strains over multiple batches, will help reduce soak time per batch, and will possibly help normalize the flavor profile (cupping experiments to follow). When access to industrial-grade bacteria and yeast is not an option, carryover water, or what I call "yesterday's water" will still greatly improve the process.

This article is associated with a project: Ulian Project: Improve Processing Technique