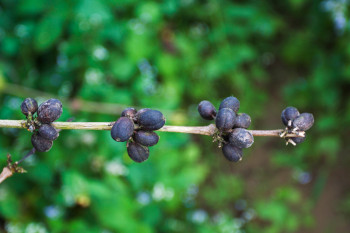 I received my Kone from Able Brewing yesterday and brewed with it this morning.

For a bit of history, Keith Gehrke of Able Brewing used to be with Coava Coffee and together they made the Coava Kone, the first iteration of what we know today as the Able Kone.  Keith and Coava parted ways and Keith started Able Brewing and continued his work on the Kone, making several changes such as a flat tip, the rigid black plastic ring, and changes to the matrix of holes that define the filter itself -- their density, size, and layout all affect the filter's function (for more on the design iterations, check out this video from able).

Brewing with the Kone is a little different than brewing with a paper filter; interestingly enough it calls for a finer grind, which facilitates the coffee bed acting as a filter.  Here's what Keith said in an interview last year;

With reusable filters, the goal is to clog the filters. You want the holes to clog, because if you don't clog them, and you expose the coffee to too much turbulence, and have too much agitation of fine and large particles, then you're going to force all the fine particles out of the holes [and undesirably into your cup], because no hole can stop them. But if you grind fine enough and are gentle enough in your pouring, you let the grind become its own filter, that's what really creates a more restricted brew and a cleaner cup. So a finer grind results in less fine particles in your cup. It's counterintuitive, but that's what happens.

What I've found with the Kone is that it produces a coffee with slightly more body than what traditional paper Chemex filters produce, but not nearly as much as a French Press.  The additional sediment, which is what creates "body" in a coffee, contains oils which add a bitter element to the coffee.  Some people interpret this as a stronger or bolder flavor.