The World Coffee Producers Forum had its first meeting in 2017 in Medellín, Colombia and I was fortunate enough to be able to attend. The first forum had representatives from about 40 different coffee-producing countries from around the world, as well as several dignitaries. The titles of a lot of the speakers lends credence to the importance this forum has to the coffee sector.

But why do I find this forum to have been so consequential? First, coffee is largely produced by smallholder farmers and that means it has a large social impact. It is also, obviously something that is produced in rural areas and is often associated with poverty on the one hand, and on the other, it is rarely associated with wealth. There is also a disconnect between the profit margins at the demand end of the value change versus the supply side. This disconnect is often codified by the statement ‘coffee should be more expensive.’ And one of the goals of this forum, was to explore ways to increase the incomes of producers and by extension, alleviate poverty in rural areas of producing countries, which also happen to frequently be developing countries.

Therefore a large theme of many of the speakers on the first day was how to use coffee as a tool to improve economies and in turn, move development forward at a national level. You can see this especially in the Clinton/Santos panel discussion as well as Jeffrey Sachs’ keynote speech.

A forum like this often produces so much information, so many topics to ponder, deconstruct, reconstruct, etc, that it becomes difficult to put all of one’s thoughts together into a cohesive thing and this is certainly the case for me here. However, what follows is my best attempt at at least archiving some of the information and independent thoughts I’ve had and published about the event.

The original web page for the forum has been taken down, presumably to be replaced with something for the new, not-for-profit that has been formed as a result of the forum. Because the old web page is largely gone (though some of it was archived by the Way Back Machine), I’ve included a basic run-down of the program, the speakers, etc below.

Tour of the Jerico Municipality

Visit to the Jerico Coffee Cooperative

The final product of this first forum was the Final Declaration, which clearly defines the problem world coffee producers face as well as the forum’s next steps, which include the creation of an action plan and a world-wide committee consisting of representatives from both consuming and producing coffee regions. You can view the Final Declaration here.

Just recently, in April of 2018, it was announced that the forum will become a nonprofit organization and will have its next forum in 2019, location TBD. This is great news, as the forum gives the producers a collective, organized voice, as well as an opportunity to get that voice heard by those who can make a difference; industry and government leaders.

I recorded a lot of the presentations and panel discussions and have transcribed some. Some recordings are better than others and I did my best with the transcriptions. Let me know if you find problems!

And we're off to see some coffee trees! #WorldCoffeeProducersForum

Everywhere we went on the field trip we had a police escort. This guy was curious about the drone and after seeing some videos from it he asked for a picture with me. Manuel Troya Osorio, Policies Ambiental y Ecological #WorldCoffeeProducersForum

I created an album in flickr of all of my photos from the event that you can find here. 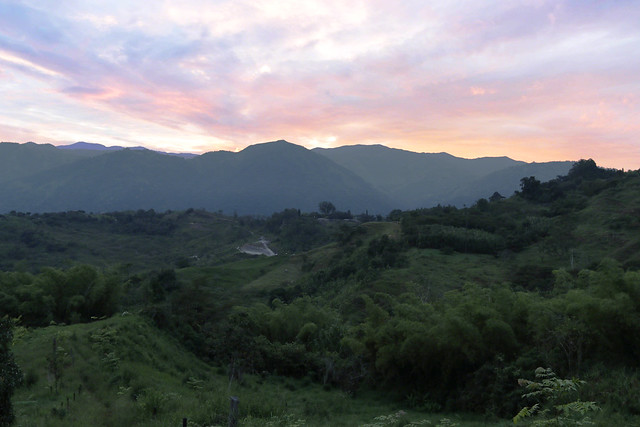